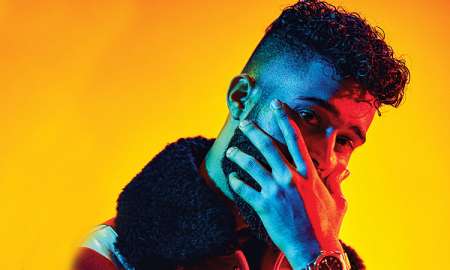 Amritpal Singh Dhillon, known popularly as AP Dhillon, is an Indian singer, rapper, songwriter and record producer associated with Punjabi music. Five of his singles have peaked on the Official Charts Company UK Asian and Punjabi charts, while "Majhail" and "Brown Munde" have topped the chart.

Dhillon started his career in 2019 with singles "Fake" and "Faraar". In 2020, his single "Deadly", produced by Gminxr entered UK Asian chart published by the Official Charts Company, and peaked at number 11. Also, the song entered top 5 on UK Punjabi chart. His next single "Droptop" with Gurinder Gill also appeared on both UK Asian and UK Punjabi chart. In June 2020, he collaborated with Gurinder Gill and Manni Sandhu for single "Majhail", which topped both the UK Asian and Punjabi chart, and became their best performance till date. In July 2020, he appeared in "Excuses" by Intense, which peaked at number 3 on UK Asian and topped the UK Punjabi chart. In September 2020, he released "Brown Munde" with Gurinder Gill, Gminxr, and Shinda Kahlon. Nav, Sidhu Moose Wala, Money Musik, Anmol Dalwani and Steel Banglez appeared in its music video. The song entered Apple Music chart in Canada. The song debuted at number one on the UK Asian chart, became his second number one on the chart.

In 2020, AP Dhillon released his first EP, Not by Chance. All seven of the songs from the EP charted on the NZ charts and occupied the top five of the Official Punjabi Music chart in the UK.

In 2021, AP Dhillon and his team performed a live concert for the first time as part of the "Over The Top - The Takeover Tour" in major 6 cities in India.