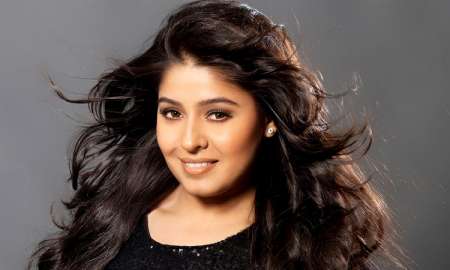 Sunidhi Chauhan was born on August 14, 1983. She crooned her first number Ladki Diwani (Shastra) in 1994, went on to win the mega final of Meri Awaaz Suno in 1996, has sung for over 2,500 Hindi and regional language songs till date.Sunidhi began performing when she was five. Her dad, Dushyant Chauhan, was the first one to spot her immense potential.

TV host Tabassum spotted her at a show and reinforced her dad's belief which made him shift to Mumbai with his entire family to develop her talent. They moved to the city of dreams and into music director Kalyanji's Little Wonders troupe, in which she was the lead singer.Fame really came to her, though, only through the TV show Meri Aawaz Suno. The prize for the winner was to cut an album with HMV. Sunidhi won and recorded Aira Gaira Nathu Khaira with HMV. However, this was promoted as a kid's album and did not do justice to Sunidhi's immense talents.

Although her first break in a Hindi film was in the film Shastra, her first breakthrough came with Ram Gopal Varma's Mast. She sang the hit Ruki Ruki Si Zindagi and also three other songs (including Mast) in the film. Sandeep Chowtha's first film as a composer got an ideal virgin voice in Sunidhi and her song became the most memorable number in the film. She added yet another feather to her cap by bagging the Filmfare RD Burman Award for New Music Talent in 2001.Sunidhi married a much older music video director Bobby Khan at a very young age, but her parents strongly disapproved of it. She is now single. Not one to rest on her laurels, she started training in Indian classical music so she could improve her skills. She also loves Western music and Mariah Carey and Michael Jackson top her list of favourites. Her ambition is to achieve global fame like them.

I Know You Want It Sheila Ki Jawani Single $2.19

Betiyaan Save The Girl Child Single $1.69

Dance With Me From Mumbhai Connection Single $2.19

Aala Re Aala From Shootout At Wadala Single $1.69 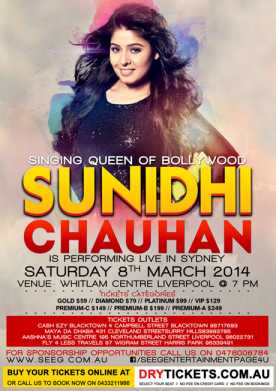